The ‘punk’ of Solarpunk 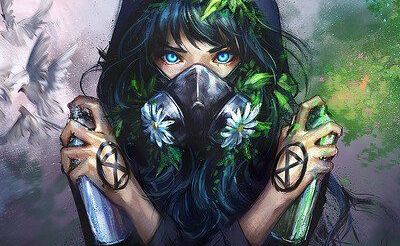 Some months have passed since the inauguration of solarpunk.it portal, months which to us have meant a whirlwind of translations, popularizations, organization of contents, presentations and discussions; all this while we have been realizing a fact: in the portmanteau “solarpunk”, meant to be explanatory of the movement and of the literary genre, it is much easier to explain the root “solar” than the suffix “punk”.

Usually, it is simple enough to explain how “solar” includes two entwined concepts:

In our manifesto, we have narrated the “solar” in this way:

Solar. Solar is the primal spring and symbol of life, is the energy alternative to fossil fuels, is what is already here, and that we must employ in a sustainable and shared manner in order to survive.

Solar is the utopian will to (literally) cultivate hope.

Solar is the light of the day, which is opposed to the rainy, enclosed and post-urban scenery of dystopia.

As regards “punk”, in the Manifesto we have expounded in a likewise synthetic and consistent way:

Punk. The germs and the practice of uprising. The refusal of the unsustainable, predatory, killing capitalist model of development, openly adverse to life and vitality not only human. An opposite rection to dystopic narrative, which no longer purveys to us useful instruments for reacting and slips into fashionable conservativism or extinctionism.

As we wrote the Manifesto, it seemed to us that for both components of portmanteau “solarpunk” the matter was likewise straightforward, and that it was clear that “punk” in “solarpunk” is the uprising against the capitalist system.

We could say it even more tersely: solarpunk is punk because it is anticapitalist.

Let us state it with different words: punk in solarpunk adds to utopia an anticapitalist strain which should be intrinsic to it, but which in this moment is subversive. We call ourselves “punk” because we rebel against the TINA narrative (there is no alternative) and we mean to anticipate in narrative real alternatives, many possible alternatives, which then we mean to build actively in the world.

Punk is rebellion: rebellion to the capitalist neoliberal system, now dominating the minds more than any kingly divine right ever did. A system which, to cite Jason Moore, wants to be ecology-world, and which we now refuse.

And punk is also rebellion to the belief/narration that there are no better futures, that we are done for, that “we deserve extinction”, that après nous le déluge.

We have repeated these concepts every time we’ve been asked, and when we noted that they weren’t well focused: still confusion lingers on; several misunderstandings remain about the “punk”. Why this?

After reading some recent exchanges, I start wondering whether some misunderstandings aren’t actually intentional, and whether, in contacting the novelty of solarpunk, somebody is putting in place a willful mystification, in order to remain tightly closed to any real debate.

As far as I’m concerned, I do not demand that everybody agrees on everything, and (as I happened to say time and again) I’m not interested in convincing anybody. I am not scared by debate, in fact I like it, and I am aware that no instance can always be understandable: hence it must be clarified, reasoned, revised, updated, also thanks to criticism.

But I have to reckon that in front of “punk” in solarpunk problematic arguments are rife, based on interpretations refractory to any clarification and not corresponding to the real principles.

This is why I thought of writing this post, after all: for it to be a quick and ready-to-use handbook to the most common objections to this theme. After reading it, objections may still be there, or may even accentuate; but they will have to be consequently based on arguments, brought deeper, further defined. Should this appear not possible, they would necessarily be abandoned, wouldn’t they? And then we might move on to something else, wouldn’t we?

Quickly, so, and readily:

After all, I am afraid that the issue is: in order to become knowledgeable about a topic and discuss it constructively, it is necessary to really want it. If not, we do not have a debate, but something else, which personally I am not even interested in defining.

Let me now make another fact very clear: we in Solarpunk Italia are investing so much energy and work, in a totally voluntary and no-profit way, in order to do several things. To inform, translate, publish, popularize, offer ideas, arise interest, connect to other literary and activist groups, create networks, be together well, take care of the stories we meet if these stories want to take care of the world. To do so, we have necessarily to take care of ourselves as well, and of the time we offer to such a volunteer activity (which is not worthless just because it is free). This intention excludes for us the availability to bickering without a common ground where a dialectic, even contrary, could be based: it could not be honest, constructive, sensible.

Our invitation remains the same, so. In order to know what solarpunk is, read our manifesto: we have written it ex novo after a careful study of international solarpunk manifestos and of solarpunk narrative production available as of January 2021.

And then, if something resonates with you, go ahead: read solarpunk! Read the stories, the novellas, the novels, or just some well-written article (here in the site we propose many to you, some we have translated on purpose). Chart your own personal route, which makes you cognizant and instruments to interpret / question / write your own solarpunk.

If on the contrary you’ll find you don’t like solarpunk, if you find it disagreeable, if you think it the case for starting debates, criticisms, arguments, or fighting against… here we are, we will not avoid confrontation, because together we can converse and create itineraries of criticism useful to both parties and to whoever will join.

On the other hand, we will always avoid discussing with who talks about solarpunk not having read even a line of it; and considering as a counterpart who assumes a sarcastic stance because they feel their reading habits or their unshakeable faith in a very, very bad future under threat. Finally, we declare our absolute indifference towards who willfully and instrumentally mystifies the concepts on which we work day after day with attention, time, care, energy and effectiveness.

We will anyway be always open to those who get to be informed also in the future, and perhaps wish to return to the debate with some more cognizance and fairness. Utopia? Surely: what would it be worth, shouldn’t we practice it also in such a case?
Mala tempora currunt, sed…  meliora paramus!

read our other posts in Englis language

This  website uses cookies to improve your experience while you navigate through the website. Out of these, the cookies that are categorized as necessary are stored on your browser as they are essential for the working of basic functionalities of the website. We also use third-party cookies that help us analyze and understand how you use this website. These cookies will be stored in your browser only with your consent. You also have the option to opt-out of these cookies. But opting out of some of these cookies may affect your browsing experience.
Necessari Sempre abilitato
I cookie necessari sono assolutamente essenziali per il corretto funzionamento del sito web. Questa categoria include solo i cookie che garantiscono funzionalità di base e caratteristiche di sicurezza del sito web. Questi cookie non memorizzano alcuna informazione personale. Necessary cookies are absolutely essential for the website to function properly. This category only includes cookies that ensures basic functionalities and security features of the website. These cookies do not store any personal information.
Non-necessary
Qualsiasi cookie che potrebbe non essere particolarmente necessario per il funzionamento del sito Web e viene utilizzato specificamente per raccogliere dati personali dell\'utente tramite analisi, pubblicità, altri contenuti incorporati sono definiti come cookie non necessari. È obbligatorio ottenere il consenso dell\'utente prima di eseguire questi cookie sul tuo sito web. Any cookies that may not be particularly necessary for the website to function and is used specifically to collect user personal data via analytics, ads, other embedded contents are termed as non-necessary cookies. It is mandatory to procure user consent prior to running these cookies on your website.
ACCETTA E SALVA